Thank you for your patience while we retrieve your images.

Radu (Domenique Jann) and his sister, Maria (Ana Ularu) are faced with life or death decisions when they learn that their mother needs a transplant. Drawing from what they've learned on the streets of their working class Bucharest neighborhood, brother and sister do what they can to save their mother, while sealing their own fates.

About the filmmakers:
Gabriel Sandru is a Romanian-German who returned to his home country to make Concluzie and other short films with cinematographer Daniel Cojanu. Their work was selected at the Locarno International Film Festival in 2006.

Swiss native Dominique Jann spent two months with a dialect coach in Romania prior to shooting Concluzie in order to learn how to pronounce his lines. He was awarded Best Actor for his role in Luftbusiness at the 2009 Swiss Film Awards 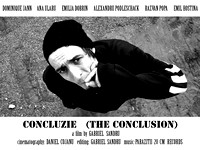